Crispy Pork Knuckle – known in Germany and Austria as Schweinehaxe – is one of my favorite things to roast. It turns out crispy, tender, and so full of flavor.

While this is definitely a hearty dish that’s best served with German potato dumplings or kasespaetzle, it doesn’t have to be relegated to October. We make it at home year-round.

I can’t help but think about Oktoberfest when I see a crispy pork knuckle. At the annual celebration in Germany, these knuckles are being slow roasted on a a spit by the hundreds. It’s the long awaited meal you eat in between drinking a few liters worth of beer.

Knowing that I can only occasionally eat a delicious crispy pork knuckle like that when I visit Germany or a neighboring country, I wanted to try this delicacy at home, to see if it’s possible to slow roast it well enough to make a property substitute.

I mean, it looks like it might be difficult to make properly at home. And of course the skin needs to get crispy, which is always a problem when cooking pork belly, so I wasn’t quite about it. But once I finally tried it, I realized that couldn’t be further from the truth. It’s actually incredibly easy to make.

What is Pork Knuckle?

If you’ve been to Germany, Austria or pretty much anywhere in that general area of the world, you’ve seen pork knuckle (or Scheinshaxe) on the menu. The image above was taken in Austria. And the image below was taken in Munich.

The knuckle itself always looks a bit different, depending on how much skin is left on and how it was cut, but it always turns out to be a tender piece of meat nestled under crispy skin. And almost always served with potato dumplings on the side!

I can’t pass up pork knuckle when I see it, especially during Oktoberfest in Munich.

The pork knuckle is located at the end of the leg, before it becomes the ankle. It contains a lot of connective tissue and collagen, which adds all the wonderful flavor and melt-in-your-mouth texture when the meat has been slow roasted.

It can be a bit difficult to find pork knuckle in the grocery store, so you most likely will have to ask for it from the butcher.

If you don’t have a specialty butcher nearby, try asking at the grocery meat counter to see if they ever stock it, or know where you can get it. Be sure to look for it under different names like ham hock and pork hock.

How to Make Crispy Pork Knuckle

You can find more involved recipes for pork knuckle that include many more ingredients and techniques, but I keep mine simple.

The pork knuckle should be allowed to shine, and there’s no need to over complicate it with a bunch of ingredients. Salt and pepper is all that’s needed to bring out the unctuousness of the knuckle.

Watch this YouTube video of Chef Uwe from GermanDeli.com make his Schweinehaxe. He uses a much larger pork shank. This was my inspiration for this recipe. He adds beer to his roasting pan, which I find to be a great addition.

After moving into an apartment with very little kitchen space, I’ve really embraced one-pot cooking. This recipe is made even simpler by cooking the side dish and the knuckle together in the same roasting pan.

I use a 1.5qt Pyrex glass loaf dish. Put the chopped veggies in the bottom of the dish, pour in the beer, about halfway up, then set the pork knuckle on top.

How to Make Crispy Pork Knuckle

I’ve seen a lot of recipes that involve brining or simmering the pork knuckle in water for an hour or so before roasting it, but I personally don’t think that extra step is necessary.

Rinse and pat dry the knuckle, then lightly score the skin, taking care not to pierce through to the meat. Then rub salt and pepper into the groves.

Place the pork knuckle with the skin side up onto the bed of chopped vegetables in your roasting dish. Add about a cup of beer. Place the dish in the oven at 325F for 3-4 hours.

Cooking time will vary depending on the weight of your pork knuckle. You’ll want to check it every 10 minutes near the end to see how it’s progressing.

Once the meat has pulled back from the bone and can be jiggled free easily, it’s nearly ready. There’s just one more step, and that’s to crisp the skin.

Unless you cook the knuckle at a really high heat, the skin will not turn into crackling as it cooks. For this reason, we have to put it under the broiler for a few minutes to crisp the skin.

If you don’t intend to eat the skin, you can skip this step and just remove the skin from the meat before eating. It will look like this.

To crisp the skin, place the pork knuckle on a baking sheet and put it under the broiler on high for a few minutes.

Don’t put it too close to the heating element, and watch it like a hawk once you put it in, so it doesn’t burn. It only takes a few minutes to start to puff up.

Unfortunately, it doesn’t often do so evenly, so there may be parts of the skin that don’t get as crispy, but that’s okay. As long as you get around 50% of it crispy, it won’t matter. It’s better to remove it earlier, so parts of it don’t burn.

The meat should easily come off the bone with a fork. It can be served as is over the roasted vegetables, like green beans & mushrooms or roasted cauliflower steaks, or with mashed potatoes. You can make a quick gravy from the roasting liquid to pour over the top.

Where to Find Pork Knuckle

Most pork knuckles you’ll find at the grocery are around 2-3 pounds, sometimes more. This size will easily feed two people. It’s great to have leftovers too, though!

When possible, I like to purchase organic, farm raised pork knuckle so I can use the bones to make bone broth. It’s a great bone for this purpose, because of all the collagen.

You can get Pork Knuckle from FarmFoods, which is an online distributor of high-quality meat from local farmers, with 100% transparency as to where the meat comes from and what the animals were fed. It’s not a subscription program. You can pick what meats you want, from whichever farms you wish. 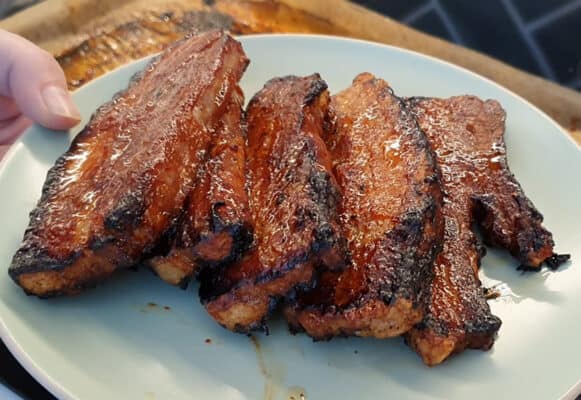 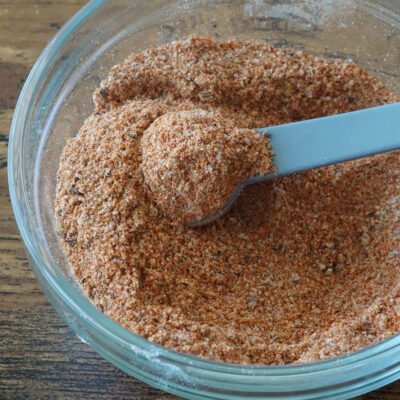 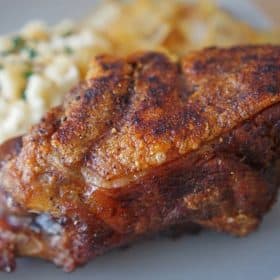