Skip to content
Jump to Recipe Print Recipe
This article has links to products that we may make commission from.

These air fryer cinnamon rolls are easier to make than in the oven and totally delicious! The fluffy dough and crispy exterior make this recipe a total hit.

The best part about this recipe is that it cooks very quickly in the air fryer and you don’t have to turn on the oven for an extended period of time. You can also cook just one or two cinnamon rolls at a time, so you don’t have a more than you need.

Of course, if you don’t have an air fryer (you should get one!), you can also cook them in the oven. I’ll give instructions for this too, below.

They are a great option when you are in a hurry or just don’t want ot make your own dough. They turn out great and cook a whole lot faster than in the oven. But I do encourage you to try making your own dough, too. We give the instructions below.

A tube of cinnamon rolls usually contains 5 big cinnamon rolls. Depending on the size of your air fryer, you usually can’t make more than 3 at a time in the air fryer. They need space to expand.

Cut a piece of parchment paper so that it fits inside the air fryer. This prevents the cinnamon rolls from sticking to the tray.

Set three cinnamon rolls on the paper and cook at 350 degrees F for 4-6 minutes. Flip them over and cook for another 4 minutes. If you want them to turn out crispier, remove the parchment paper when you flip them over.

For smaller cinnamon rolls, you can reduce the cook time to 3 minutes per side.

How to Make Your Own Cinnamon Rolls

I recommend using a stand mixer with the dough hook for this, because it requires a lot of mixing.

In the bowl of your stand mixer, combine the warm water, 1/2 cup of sugar, oil and yeast. Yes, it’s a lot of yeast. It makes the dough very active, so it doesn’t take long for them to rise.

Let it sit for fifteen minutes until it’s frothy. This is how you know the yeast is active.

Now you roll out the dough. I usually just roll out dough on my countertop. You can use a silicon mat or a large cutting board.

Spread the melted butter over the surface of the rectangle.

Mix together the remaining 1 cup of sugar and the cinnamon in a bowl. Then sprinkle the mixture evenly over the dough.

Roll the dough lengthwise into a long tube shape.

Cut the roll into twelve pieces. Let them rise for a bit on the counter.

It doesn’t take much time to rise. Maybe 15 minutes at most. Just watch out that it doesn’t rise too much while you’re making other batches in the air fryer.

If the rolls overrise, they can deflate, so don’t allow them to rise too long on the counter. They can be kept in the refrigerator until ready to bake.

The easiest way to cook cinnamon rolls in the air fryer is on squares of parchment paper, so the dough doesn’t stick. I put 3-4 rolls on each square because that is what would fit in my machine.

Since you can only cook about 3-4 at a time, you have to bake them in batches.

Cooking times vary between machines, so you may need to adjust the second cooking time by a minute or two. They should come out crispy on the outside and soft on the inside.

Cook Cinnamon Rolls in the Oven

If you don’t have an Air Fryer, that’s okay! You can still cook these cinnamon rolls in the oven.

Place the cinnamon rolls into an oven-safe baking dish. I recommend a 9″x13″ pan. Place them in four rows of three, spaced out.

Bake in the oven at 350 degrees F for 20-25 minutes. They are done when they’re golden on top and spring back to the touch.

How to Make Cinnamon Roll Frosting

To make the cinnamon roll frosting, combine the softened butter, vanilla and confectioners’ sugar in a mixing bowl. Beat until the frosting is smooth. This leads to a pretty thick frosting.

If you’d like it to be more like a glaze, you can add a teaspoon of milk at a time until you reach the desired consistency.

When the cinnamon rolls come out of the air fryer, you can spread the frosting on and allow it to melt over the roll. It’s the perfect combination. 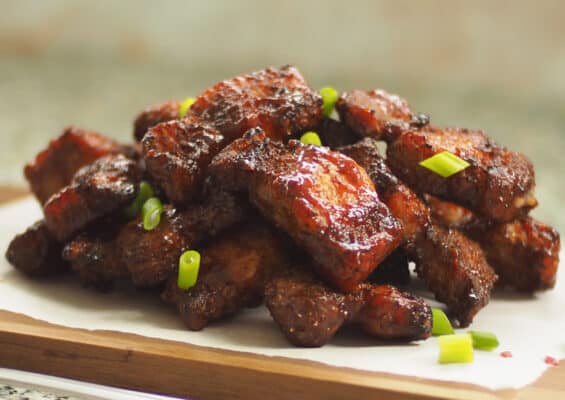 The yeast is equivalent to about 3 packets, if you’re using a packet instead of loose yeast. You can mix this by hand, but it takes quite a while. Using a stand mixer with the dough hook is advised. The dough will continue to rise while it is waiting to go into the air fryer.  I recommend putting the last few batches in the refrigerator while they wait their turn to cook. They might overrise and become flat.  If you don’t wish to cook these all at once, or right away, you can place them in the refrigerator after you’ve rolled them (before they rise), and take them out whenever you’re ready to use them. They can also be kept in the freezer. Leave enough time to thaw and rise before cooking.

» If you don’t have an Air Fryer yet (go directly to Amazon and order one!), you really should consider it. We have a free Air Fryer starter guide that you can download or check out our Air Fryer page for more.

Pin it for later!

Hi! I’m Angela and I joined the team in 2020. I love to try new foods and recipes and look forward to passing them along to you. I live in a small town in Oregon with my two adult children who enjoy experimenting with food as well.

Hi! I’m Laura, the author and recipe creator behind A Food Lover's Kitchen. I like to keep it simple in the kitchen, but without losing quality or flavor. Check out our quick, but delicious recipes for two.

How to Cook Brats in the Air Fryer

This website uses cookies to improve your experience while you navigate through the website. Out of these, the cookies that are categorized as necessary are stored on your browser as they are essential for the working of basic functionalities of the website. We also use third-party cookies that help us analyze and understand how you use this website. These cookies will be stored in your browser only with your consent. You also have the option to opt-out of these cookies. But opting out of some of these cookies may affect your browsing experience.
Necessary Always Enabled

Any cookies that may not be particularly necessary for the website to function and is used specifically to collect user personal data via analytics, ads, other embedded contents are termed as non-necessary cookies. It is mandatory to procure user consent prior to running these cookies on your website.

SAVE & ACCEPT
Send this to a friend