Cilantro has a very bright and citrusy flavor that is a vital component when preparing a number of international dishes, dips, and curries. It’s an essential ingredient in a lot of different types of cooking. However, cilantro is also quite divisive. You either love it or you hate it.

Those who love cilantro will liberally sprinkle it on anything and everything they eat to perk up the flavor profile and add a nice fresh aroma. Those who hate it tend to find the taste of cilantro bitter and soapy.

If you’re one of those people who think it tastes like soap, or you have an allergy to it, you’re probably looking for some good alternatives to cilantro so you can still add an aromatic fresh herb to the dishes that call for cilantro.

We have put together a list of the 9 best substitutes for cilantro in this article. Depending on what you’re making, these herbs can enhance their flavor, but you’ll want to be choosey when deciding which to use in each scenario.

The alternatives mentioned in this article will not give you the exact taste, but they can add brightness and freshness to your food in a slightly different way.

If you’re looking for a substitute for cilantro that will heighten the flavor of your food, we’ve got some alternatives you can use. Just keep in mind that these herbs are not all interchangeable in every dish. You’ll want to choose the substitute that works best for the dish you’re making.

Keep in mind that when we speak about cilantro, we’re referring to the fresh leafy herb, not the dried herb, which is more often referred to as coriander in the United States. Read more to learn the differences between the two.

People often think that parsley is cilantro, because both cilantro and parsley look very much the same. However, while they are quite similar, they are also very different.

Parsley can be even more bitter than cilantro, if you’re one of those who find cilantro bitter. Parsley has a more herbaceous aroma and flavor than cilantro, which is more citrusy.

However, parsley makes a good sub for cilantro because it pairs well with meats, vegetables and fruits, and it will enhance the taste of your dish. Mexican foods, like salsa and guacamole benefit from parsley as a substitution.

If you’ve never tried eating the bright green leaves on the top of the celery stock, you should! These delicate, earthy leaves are great as a substitute for cilantro in soups and stews, sauces or purees. The leaves even resemble cilantro leaves more than just about any other plant.

Since celery has a very similar flavor profile to cilantro, you can sprinkle the leaves on almost anything you would cilantro. While there will be a slight hint of celery to it, most people won’t even notice the difference when used as a garnish.

Be sure to use the smaller, more tender leaves from new stocks, not the tougher more fibrous larger leaves.

Basil is closely related to cilantro, and its bight and citrusy taste make it the perfect substitute for cilantro in many dishes, particularly Asian, Italian, or Mediterranean cuisine.

Basil has a negligible amount of sweetness and also has a subtle spicy flavor, with a strong floral/citrus aroma. It’s great for use in Asian foods, where both cilantro and basil are often used.

Dill is not only different in appearance, it tastes quite a bit different than cilantro, too. But that doesn’t mean it can’t make a great replacement for cilantro in some dishes.

The foods that dill goes best with are seafood, breakfast items like Eggs Benedict, and things that benefit from a bright, citrusy [read: pickle] taste and aroma. A small amount of dill is enough to give you a huge flavor punch.

You wouldn’t want to add dill to any Mexican foods, which are often sprinkled with cilantro. The two flavor profiles don’t go together well.

If you are willing to replicate the complex taste of cilantro, you might want to mix together all three of the herbs we’ve just mentioned: basil, parsley, and dill.

Separately, these spices all have a very unique profile that can be overwhelming to the dish on their own, but when mixed they create a more well-rounded flavor that can be used in just about any dish as a replacement for cilantro, particularly soups and stews.

QUICK TIP: If you want to add some of these herbs to your food, make sure to add them after completing the cooking process. The intensity of their flavors gets reduced when you introduce these elements to heat.

While fresh cilantro in called coriander in Europe and the UK, it is generally used to refer to dried seeds from the cilantro plant. When dried, coriander can be used as seeds or can be ground into a finer seasoning that can be sprinkled on food to add a similar aroma and flavor as fresh cilantro.

While dried coriander isn’t a great direct substitute for fresh cilantro that requires a fresh aroma and bright green pop of color, it does a pretty good job of producing similar taste and smell, so it can be used as a sub in soups or dishes where the flavor is masked or muted.

If you love Latin American dishes, you probably know that dried cumin is often paired with cilantro. Both of these flavors are typically present in Mexican dishes, for instance.

Cumin has a slightly sweet and earthy taste and it’s quite effective, so only use a small amount to avoid overwhelming the dish with cumin flavor. If you love spicy foods, cumin and chili powder make a great combo and you won’t miss the cilantro!

Curry powder is also used in a lot of dishes that you’ll also find cilantro in, particularly Indian dishes that consist of many seasonings and spices.

Curry powder can help you create a lovely flavor profile for a dish that requires a lot of robust flavors, particularly when you don’t have any cilantro or don’t want to use it. Just keep in mind that there are many different types of curry so you’ll want to choose the right one for the dish you’re making.

Are Coriander and Cilantro the Same?

In North America, people call the fresh version cilantro. ‘Cilantro’ is a Spanish word that refers to coriander leaves. And we call the dried version coriander.
Meanwhile, the Europeans have different terminology for this same plant; they call it coriander, while the seeds are called coriander seeds.

What If I Use Dried Coriander in Place of Fresh?

Of course, you can use it dried coriander to add a cilantro flavor to a dish. However, it won’t provide an adequate substitute for fresh cilantro on dishes like tacos or in salsa, where the fresh herb is pivotal. In those cases, it’s best to use celery leaves or parsley instead.

Why does cilantro taste like soap to some people?

It’s a matter of genetics. People who think cilantro tastes like soap have a variation in a group of olfactory-receptor genes that allows them to strongly perceive the soapy-flavored aldehydes in cilantro leaves.

Cilantro has a unique taste and is used in cuisines all around the world. The intensity of its taste sometimes varies but it’s an unmistakable flavor that elevates the dish.

There is no herb that can replicate the exact taste or aroma of cilantro. However, there are alternatives that can help you achieve a similar taste or appearance in a dish.

And now that you know of these alternatives, you can expect your next meal to pack a flavorful punch.

22 Easy BBQ Side Dishes For Summer 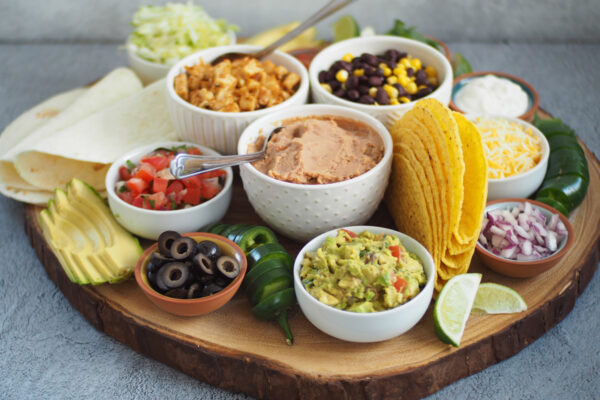 How to Build a Mexican Charcuterie Board

12 Side Dishes to Serve with Tacos

Hi! I’m Laura, author and recipe creator at A Food Lover's Kitchen. I'm all about keeping it simple without losing quality or flavor. Check out our quick, delicious recipes for 2-4.